On 19 Sept 2017, I chaired seminars in the studios of Northern Ballet in Leeds and at the Barnsley Business and Innovation Centre in South Yorkshire at which Tom Duke, our intellectual property attaché in Beijing, spoke on “Succeeding in China – How to mitigate IP risk” as part of a China IP Roadshow (see Jane Lambert Meet our IP Attaché to China 21 July 2017 IP Yorkshire). One of the reasons why Tom made that tour is that an increasing number of British IP owners contract with manufacturers in China and other countries where production costs are lower than in the UK to make goods for them under licence. Often such arrangements work very well but sometimes they can go very badly wrong.

The Claimants
The claimants in this litigation were Scomadi Ltd. and its sister company Scomadi Worldwide Ltd. According to The Scomadi Story page of their website, those companies were set up by Paul Melici of PM Tuning Racing Products and Frank Sanderson of Scooter Innovation to market a range of retro-style motor scooters inspired by the Lambretta scooters of the 1960s. They registered a number of designs with the EU Intellectual Property Office as registered Community design in 2004 under registration numbers 000245634-0001, 000245634-0002 and 001390454-0001.

The Licence
On 13 March 2013, they made an agreement with Changzhou Hanwei Vehicle Science and Technology Ltd (which trades under the "Hanway" sign) to manufacture Scomadi scooters under licence.That agreement was somewhat one-sided in that Scomadi could terminate it but Hanway could not. It also provided that "all intellectual property rights and new material (including but not limited to copyright and design rights) therein in them" should be and remain the sole property of Scomadi even though the learned recorder found at paragraph [39] of his judgment that Hanway had contributed significantly to the production designs. That agreement was modified by a supplemental agreement dated 20 Nov 2013 which substituted a flat rate royalty of US$35 for the percentage that had previously been agreed and contained the following clause:


"A. As HANWAY have invested to develop the scomadi scooter project, and supplied many good design ideas in the processes of developing the scooter, so HANWAY owns some part of final design for frame, plastic parts and lamp moulds.

In any case, two parties should consult and solve in a friendly way.

B. However under no circumstance will Scomadi be allowed to find a third party to produce the same or similar scooter. If this happens, HANWAY is not restricted by any terms of the original contract and can sell this product to any market. Even though Francis Henry Sanderson and Paul Melici own the design patent, if Scomadi find a third party to produce this scooter, it will be treated as they have agreed or confirmed that HANWAY can sell this scooter in any market.

C. However Scomadi Ltd may complete the production of all 300cc piaggio engined promotional scooters, and also be able to carry out themselves or contract out if needed, the sub assembly production of the 250 cc and over, engined variants until a time when Hanway can produce these models, without being in breach of paragraph B above."

At first, those agreements worked well. Hanway started to manufacture and market the scooter for which it paid a steady stream of royalties to the claimants.

The Dispute
Relying on paragraph B of the supplemental agreement, Hanway sought to supply its scooters to Moto GB Ltd for the British market under the Royal Alloy mark in 3 versions known respectively as the GT, the GP mark I (“GP1"), and the GP mark II (“GP2”). The following is an overview of the GT scooter that was supplied to the court by the claimants. 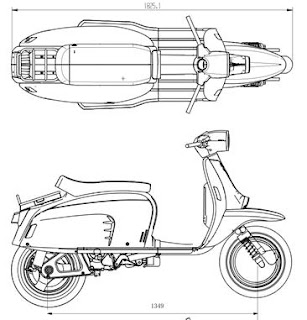 The claimants responded by suing R A Engineering Co Ltd., Moto GB and a Mr Chen on a number of grounds including infringement of its registered Community designs. Hanway counterclaimed for a declaration that it was entitled to sell its scooters into any market.  The recorder included Hanway as a defendant in his judgment even though it was a claimant in the counterclaim.

"1) Was the Supplementary Agreement (“SA”) a legally-enforceable binding contract between Hanway and the First Claimant? In particular:

b) Is consideration for the SA found in (i) the compromise of arguable claims for breach of contract, negligent misrepresentation and/or negligent misstatement or rescission (ii) the continuation of the venture between Hanway and the First Claimant (iii) the variation of the commercial terms of the Design and Manufacture Agreement (“DMA”), or (iv) Hanway’s agreement not to assert arguable rights against the first Claimant?

2) Are the Claimants estopped from asserting that the SA is of no contractual effect?

3) Is the Defendants’ trade in the Royal Alloy Scooters permitted pursuant to the SA (without prejudice to any issues relating to passing off and/or trade mark infringement)? In particular:

a) What is the correct interpretation of the SA?

b) What is the correct interpretation of the DMA?

c) When did the Claimants first 'find' a third party to produce the scooters in issue?

d) In what circumstances was the DMA terminated?"

According to the recorder, most of the hearing was taken up with issue 3 and, in particular, issue 3 (a).

"the Court has to ascertain what a reasonable person, that is a person who has all the background knowledge which would reasonably have been available to the parties in the situation in which they were at the time of the contract, would have understood the parties to have meant,"

It is a unitary exercise which proceeds via an iterative process in which each suggested interpretation is checked against the provisions of the contract and its commercial consequences are investigated. Where a contract is not drafted by skilled professionals, a correct interpretation may be achieved by a greater emphasis on the factual matrix as opposed to textual analysis.

The claimants argued that:

"i) The terms of the SA do not survive the ending of the DMA for Hanway’s breach. This applied to any breach but applied a fortiori if Hanway was in fundamental breach.
ii) Even if the SA did apply, it did not permit manufacture of any further scooters after the end of the DMA, but only permitted sale of scooters already manufactured (ie a run-off period) in the end that the Claimants secured an alternative manufacturer of the same or a similar scooter.
iii) Their construction made commercial sense because it provided Hanway with “further security for its investment” whilst preventing the Claimant losing control “over the project to which its directors ... had devoted all their lives”. This was so even without a runoff period, although if there were a runoff period then this would protect Hanway against being saddled with existing stocks."

The defendants replied that:

"i) The SA was specifically intended to apply in the very event that the joint venture broke down. It was a “rough and ready resolution scheme”.
ii) The SA was a complete code designed to reflect Hanway’s design contribution, which contribution was expressly acknowledged in clause 2A. In particular, Hanway was to become the exclusive manufacturer. If the Claimants went elsewhere then Hanway itself was permitted to use the designs, subject to an ongoing obligation to pay the $35 licence fee. Conversely the Claimants did not have to pay Hanway anything. This remained the position whatever the reasons for the breakdown.
iii) The suggestion of a runoff period was inconsistent with the wording of the clause. For instance clause 2B was triggered by the Claimant’s use of a third party to produce “the same or similar scooter”, which meant that Hanway was free to “sell this product”. The Defendants argued that this wording went beyond what Hanway had actually manufactured, and was more apt to reflect IP rights which were jointly owned and developed.
iv) Their construction made commercial sense because the SA was in substance a dispute resolution scheme whereby both parties who had contributed to the design were able to run their separate businesses post-termination. Had it not been for the SA, there would be 'an unproductive and unsatisfactory stand-off'”.

The recorder found for the defendants for all the above reasons. He also found that the agreement was legally binding and supported by consideration.  He concluded at paragraph [112] that the defendants were entitled to manufacture and sell their scooters pursuant to the true construction of the supplemental agreement.

Conclusion
The dispute that arose was one that could easily have been anticipated. Indeed, I discussed a very similar one in chapter 1 of my book, Enforcing Intellectual Property Rights: A Concise Guide for Businesses, Innovative and Creative Individuals Routledge, 28 Feb 2009. In his talk, Tom stressed the importance of contracts that are enforceable in China, Generally, these will be drawn up in Mandarin by Chinese lawyers specializing in IP law. Had Scomadi consulted such lawyers instead of signing the supplemental agreement and hoping for the best, they could have avoided expensive litigation and the circumvention of their design protection.