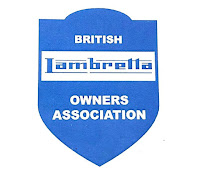 Mr Frankland, who claims to be President of the British Lambretta Owners Association and was once a member of the Lambretta Club Great Britain, applied to register the above device as a registered design on 29 Sept 2018.  The products for which the design was registered were "Graphic symbols and logos, surface patterns, ornamentation" in class 32 and "Articles of adornment" in class 11.  As there is no substantive examination of registered design applications or any procedure for opposing such applications in this country, the application was accepted and proceeded to grant.

A "Lambretta" for readers who are too young ever to have seen one is a type of motor scooter that became very popular with young people in the UK and elsewhere during the 1950s and 1960s.  It was originally manufactured in Italy by Innocenti SA and later in other countries under licence.  Such scooters were adopted by young people who described themselves as "mods" as opposed to "rockers". Mods were interested in elegant clothes and music while rockers preferred motorcycles and cared only for clothing suitable for motorcycling.  On a number of occasions, fights broke out between mods and rockers at Engish seaside resorts on public holidays.  The great choreographer, Peter Darrell, created a ballet called "Mods and Rockers" which was danced to Beatles music by the company now known as Scottish Ballet at the Prince Charles Theatre in London in 1963 (see The Peter Darrel Trust Works 1960s).

Upon learning of the registration, The Lambretta Club Great  Britain applied for it to be declared invalid on the following grounds:

Mr Frankland filed a defence resisting the second and third grounds but effectively admitting the first by attaching a newsletter dated 1956 that disclosed the design.   As the design was not new, the hearing officer had no option but to declare it invalid.   He had no reason to consider the other grounds and did not do so.  He awarded costs of £948 to the Club.

Mr Frankland appealed on the ground that the hearing officer had invalidated his registration on the ground of lack of novelty and on that ground only. In the circumstances, he did not see why he should pay anything to the Lambretta Club GB as they had no claim to the logo at all. He asserted that the “badge” belonged to the British Lambretta Owners Association which is a non-profit club with no money and that he personally was in financial difficulty.

Mr  Howe observed at paragraph [7] of his judgment that whether or not the Club had any claim to the logo was irrelevant to its entitlement to costs.  He added that:

"It was open to anyone potentially affected by Mr Frankland’s registration of this logo as a design, whether claiming any ownership in it or not, to bring an application to invalidate it and to claim their costs of doing so if successful."

It was correct that Mr Morris had decided the case on one issue only but that did not affect the Club's entitlement to costs:

"a court or tribunal before whom a party achieves overall success based on only one of several issues may make an overall award of costs to the winning party under the principle that the costs follow the event. It is a departure from the norm to award costs based on the individual issues which led to the 'event'”.

Questions relating to costs are always discretionary and the exercise of such discretion can only be questioned on appeal where there has been an error of principle of which there was no sign here.  Finally, Mr Howe added at paragraph [10]:

"Alleged impecuniosity is not normally a ground for resisting a costs order 4 in civil proceedings of this kind. Mr Frankland caused the Club to incur costs by choosing to register an invalid design. He could have reduced his risk of an adverse costs order by giving up defending this plainly indefensible registration at an early stage."

He reaffirmed Mr Morris's costs award and invited the Club to apply for any costs that it may have sustained in resisting Mr Frankland's appeal.

The most interesting part of Mr Howe's judgment was a discussion of whether the design was registrable at all quite apart from the question of novelty.  He reminded himself of the statutory definition of "design" in s.1 (2) of the Act:

"In this Act “design” means the appearance of the whole or a part of a product resulting from the features of, in particular, the lines, contours, colours, shape, texture or materials of the product or its ornamentation."

He also considered the definition of "product" in s.1 (3):

“'product' means any industrial or handicraft item other than a computer program; and, in particular, includes packaging, get-up, graphic symbols, typographic type-faces and parts intended to be assembled into a complex product". [emphasis added]

It appeared to Mr Howe that the logo could only fall within the definition of "design"  if it was to be regarded as within the extended definition of “product” in s.1 (3) as a “graphic symbol”.  He continued at paragraph [16]:

"The logo consists principally of the words 'British Lambretta Owners Association', the word Lambretta being stylised but the other words plainer, within a shield device. It is a classic trade mark logo, consisting of words (partly in fancy script), and of non-verbal graphic elements. Whether or not a logo of this kind is registrable as a design, and if so what product it is “ornamenting”, may raise issues which need to be argued and addressed in future cases. In the present case these issues have not been raised or argued and in any event do not arise because the registration is invalid on the straightforward ground of lack of novelty."