Showing posts from February, 2014
Show All

Two interesting points arose in  British Shorinji Kempo Federation v Shorinji Kempo Unity   [2014] EWHC 285 (Ch) (17 Feb 2014) in which my colleague Thomas Dillon  appeared for the  British Shorinji Kempo Foundation ("BSKF")  on a pro bono basis. The first was what constitutes genuine use for the purpose of s.6A of the Trade Marks Act 1994 . The second was the methodology by which the judge determined whether the mark that had BSKF sought to register was similar to one that had previously been registered by Shorinji Kempo Unity ("SKU") and if so whether there was any likelihood of confusion for the purposes of s.5 (2) of the Act. The Parties SKU is an entity whose function is to hold the intellectual property rights of the World Shorinji Kempo Organisation ("WSKO") . WKSO had many branches or affiliated organizations around the world. According to WSKO's website, Shorinji Kempo is a Japanese martial art founded in the town of Tadotsu in 1947. The B
Post a Comment
Read more 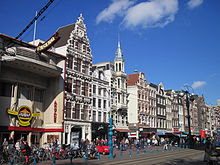 Amsterdam   Source Wikipedia According to Wikipedia  Red Bull is the most popular energy drink in the world, with 5.2 billion cans sold in 2012. Its manufacturer, Red Bull GmbH , has registered the RED BULL mark has registered those words and their accompanying logo as word and device marks in trade mark registries around the world including the Benelux Office for Intellectual Property ( "BOIP" ) . The company registered that sign with BOIP for non-alcoholic drinks in class 32 with effect from 11 July 1983. After decades of massive sales and extensive advertising nobody could argue that that mark has a reputation within the meaning of art 5 (2) of the Trade Marks Directive (Directive 2008/95/EC of the European Parliament and the Council of 22 October 2008   to approximate the laws of the Member States relating to trade marks OJ 8.11.2008 p 299/25).  S.10 (3) of our Trade Marks Act 1994   implements that provision. There is in the Netherlands a chain of
Post a Comment
Read more
More posts