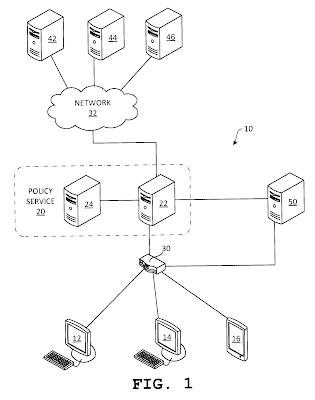 This was a claim under s.12 of the Patents Act 1977.  The claimant was a company which one Bradley Kite had set up to develop and exploit his inventions. Mr Kite alleged that he had invented a policy service authorization and authentication for which the second defendant had applied for patents in a number of countries including the UK through the Patent Cooperation Treaty under international application number WO 2013/177687 A1 The first defendant was the second defendant's holding company and the third  was an employee of the first defendant who is named as inventor.

S.7 (2) (a)  of the Patents Act 1977 provides that a patent for an invention may be granted primarily to the inventor or joint inventors, that is to say, the actual deviser or devisers of the invention (see s.7 (3)).  However, that rule is subject to s.7 (2) (b) which provides that a patent may be granted  "in preference to the foregoing, to any person or persons who, by virtue of any enactment or rule of law, or any foreign law or treaty or international convention, or by virtue of an enforceable term of any agreement entered into with the inventor before the making of the invention, was or were at the time of the making of the invention entitled to the whole of the property in it (other than equitable interests) in the United Kingdom."

"Notwithstanding anything in any rule of law, an invention made by an employee shall, as between him and his employer, be taken to belong to his employer for the purposes of this Act and all other purposes if -
(a) it was made in the course of the normal duties of the employee or in the course of duties falling outside his normal duties, but specifically assigned to him, and the circumstances in either case were such that an invention might reasonably be expected to result from the carrying out of his duties; or
(b) the invention was made in the course of the duties of the employee and, at the time of making the invention, because of the nature of his duties and the particular responsibilities arising from the nature of his duties he had a special obligation to further the interests of the employer’s undertaking."

Any other invention made by an employee shall, as between him and his employer, be taken for those purposes to belong to the employee by virtue of s,39 (2).  There was no dispute that Mr Kite had worked on the invention mentioned above while he was employed by or contracted to the first defendant.  The issue, in this case, was whether he had done so in accordance with s.39 (1).

On 25 Jan 2018, the claimant referred  to the Comptroller-General of Patents, Designs and Trade Marks (the head of the Intellectual Property Office) the question whether it was entitled to be granted (alone or with any other persons) any such patent for the invention or had or would have any right in or under any such patent or an application for such a patent under s.12 of the Patents Act 1977.  The matter came on before Mr H Jones who declined to deal with the reference under s.12 (2) in a decision dated 25 May 2018 (see Prosyscor Limited v Netsweeper Inc. and others (O/327/18 25 May 2018).

One of the reasons why Mr Jones declined to deal with this case was that there were already breach of confidence proceedings in the Intellectual Property Enterprise Court.   Mr Kite alleged that he disclosed in confidence information relating to his invention to the third defendant and one of his colleagues and that that information has been exploited by the first defendant.

The case came on before His Honour Judge Hacon who set the issues as follows at paragraph [12] of his judgment:

Breach of confidence
(5) What confidential information was disclosed to Netsweeper pursuant to the Confidentiality Agreement of 7 June 2011?
(6) Was anything disclosed beyond what had been disclosed in the First and Second Intranet Posts?
(7) Have Netsweeper made use of any information so disclosed?"

The first and second defendants conceded that Mr Kite should be named as joint inventor along with the third defendant on the PCT Application and any patent applications and granted patents derived from it but they argued that naming Mr Kite an inventor left ownership unaffected because Mr Kite's contribution was made while he was the first defendant's employee, or alternatively its consultant.

The sole issue on entitlement was whether any invention made by Mr Kite during his employment was made in the normal course of his duties as an employee within the meaning of s.39 (1) (a). It was not argued that any invention had been made in the course of duties specifically assigned to Mr Kite. Nor was it in doubt that if made in the normal course of his duties, the circumstances were such that an invention might reasonably be expected to result from the carrying out of those duties.  After considering the decision of the Court of Appeal in Liffe Administration and Management v Pinkava and another [2007] Bus LR 1369, [2007] BusLR 1369, [2007] ICR 1489, [2007] EWCA Civ 217, [2007] 4 All ER 981, Judge Hacon directed himself as follows at paragraph [21]:

"(1) An invention made by an employee will belong to him unless it was made in the course of the categories of duty expressly identified in s.39 (1): 'normal duties' or 'duties specifically assigned to him' under s.39 (1) (a), or duties of a nature such that the employee has 'a special obligation to further the interests of the employer's undertaking' under s.39 (1) (b).
(2) The two categories under s.39 (1) (a) are mutually exclusive.
(3) The meaning of 'normal duties' in s.39 (1) (a) is not to be resolved by reference to characterisations such as 'ordinary', 'day to day' or 'primary' duties.
(4) The starting point in defining normal duties is the contract of employment; having considered the terms of the contract one must ask: what was the employee employed to do?
(5) However, the contract of employment is not the sole arbiter of normal duties. The overall question is whether the employee was employed to try to innovate and if so, what general sort of areas his innovation duties covered at the relevant time, i.e. the date on which the invention was made.
(6) The duties of an employee may evolve over the course of time. The actions of employee and employer may give rise to an expansion or contraction of the duties initially undertaken and/or those specified in the contract of employment, so that they become (or cease to be) normal duties.
(7) The duty of confidence owed by an employee to an employer may provide a guide to the scope of his normal duties. If the circumstances are such that the employee would owe an equitable duty of confidence to his employer with regard to the invention, the invention will belong to the employer pursuant to s.39.
(8) An invention is made 'in the course of' an employee's normal duties under s.39 (1) (a) generally in contradistinction to being made in a frolic of his own."

The judge found at paragraph [55] that Mr Kite and the third defendant were joint inventors of the original invention and at [58] that the third defendant was the inventor of an improvement.  After considering Mr Kite's contract of employment, job description and am ancillary agreement that he signed when he started work, His Honour concluded that Mr Kite's contributed to the invention in the course of his duties as an employee of the first defendant. The fact that he did much of that work in his own time at home and on his own computer made no difference as that was the job Mr Kite was paid to do. Finally, the judge was sceptical as to whether any confidential information had been imparted to the defendants. Even if it had, there was no evidence that it had been misused.  In the light of those findings, the claim failed in its entirety.

The most useful bit of this case are the rules on s.39 (1) that the judge discerned from Liffe. These will be cited not just in entitlement actions but also in employee's compensation cases under s.40.  Should amplification or clarification of this article or entitlement actions generally be required, call me on 020 7404 5252 during office hours or send me a message through my contact page.
1977 Act entitlement international patent application Liffe Administration and Management Netsweeper Patent Cooperation Treaty patents Pinkava Prosyscor s.12 s.39 s.7