Jane Lambert
Intellectual Property Enterprise Court (Mr Recorder Campbell) Erol v Posh Fashion Ltd [2022] EWHC 195 (IPEC) (8 Feb 2022)
This was an action for the alleged infringement of two registered designs:
The action came on for trial before Mr Recorder Campbell QC on 2 Dec 2021 who delivered judgment on 8 Feb 2022 (see Erol v Posh Fashion Ltd [2022] EWHC 195 (IPEC) (8 Feb 2022)). By para [38] of his judgment, he dismissed the action on the ground that the registrations were invalid.
Registered Designs
A registered design is a design that is registered with the Designs Registry of the Intellectual Property Office under the provisions of the Registered Designs Act 1949 as amended.  Registration confers on the proprietor the exclusive right to use the design and any design which does not produce on an informed user a different overall impression.  "Use” means making, offering, putting on the market, importing, exporting or using a product in which the design is incorporated or to which it is applied, or stocking such a product for those purposes. That right is infringed by doing anything that is the exclusive right of the registered proprietor without that person's permission,   A design may be registered if it is new and has individual character. Unlike the procedure for the granting of patents or the registration of trade marks, there is no examination of the design for novelty or individual character when an application is made for its registration.  Consequently, the first opportunity to test the validity of a registration may be an infringement action.
The Issues
Although Mr Campbell's judgment does not exhibit or describe the defendant company's products, it may be surmised from para [2] that they bore the words "London" and  "England" above and below the flag of the United Kingdom.  However, para [37] also suggests that they were in red and grey colourways.  The issues that the court ordered to be tried at the first case management conference were:

He said that the concept of novelty required little elaboration.   As for individual character he cited paras [181] and [192] pf Judge Hacon's judgment in Cantel Medical (UK) Ltd v ARC Medical Design [2018] EWHC 345 (Pat):
"[18]. I here adopt the four stages prescribed by the General Court in H&M Hennes for assessing the individual character of a Community design to the comparison of an RCD with an accused design, adding other matters relevant to the present case. The court must:
(1) Decide the sector to which the products in which the designs are intended to be incorporated or to which they are intended to be applied belong;
(2) Identify the informed user and having done so decide
(a) the degree of the informed user’s awareness of the prior art and
(b) the level of attention paid by the informed user in the comparison, direct if possible, of the designs;
(3) Decide the designer’s degree of freedom in developing his design;
(4) Assess the outcome of the comparison between the RCD and the contested design, taking into account
(a) the sector in question,
(b) the designer’s degree of freedom, and
(c) the overall impressions produced by the designs on the informed user, who will have in mind any earlier design which has been made available to the public.
[182]. To this I would add:
(5) Features of the designs which are solely dictated by technical function are to be ignored in the comparison.
(6) The informed user may in some cases discriminate between elements of the respective designs, attaching different degrees of importance to similarities or differences. This can depend on the practical significance of the relevant part of the product, the extent to which it would be seen in use, or on other matters."
As colour was an issue, the recorder quoted paras [33] and [34] of Lord Neunerger#s judgment in PMS v Magmatic [2016] UKSC 12:

"[33]. So far as the presence or absence of colouring in any image is concerned, in [32] of his judgment on this case Kitchin L.J. explained that:

"[a]n application for a Community Registered Design may be filed in black and white (monochrome) or in colour. If colour forms no part of the design then it is conventional to file the design in black and white. Similarly, if a particular colour does form part of an aspect of a design then it may be filed wholly or partly in that colour. So also, if monochrome colours are a feature of the design, this can be shown by placing the design against a background of a uniform but different colour."

[34]. That this has long been well established is supported by Dr Schlötelburg's article, in which he wrote that "where a design is shown in colours, the colours are claimed, while a black and white drawing or photo covers all colours" - [2003] EIPR 383, at p. 385. Accordingly, as Kitchin L.J. observed at [42] of his judgment, "the various representations [in the CRD] are shown in monochrome, and so it must be concluded that this design is not limited to particular colours", and therefore "PMS cannot point to the colour of the Kiddee Case as being a point of distinction". There is, rightly in my judgment, no challenge to that conclusion, which is consistent with what was said by the Fourth Chamber of the General Court in Sphere Time v OHIM (Case T-68/10), EU:T:2011:269, [2011] ECDR 20, at [82]."
Prior Art
The defendant relied on three items of prior art referred to respectively as "Urban Attitude", "Lambert Souvenirs", and "KK Hosiery."
Urban Attitude published a brochure dated 1999 that contained a hooded top numbered "EH03" and a T-shirt numbered "EX10" which are reproduced below: 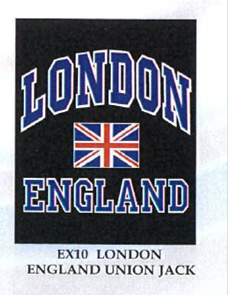 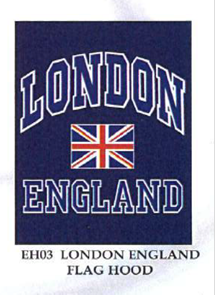 The following T-shirt was alleged to have been sold by Lambert Souvenirs of 3 Whitehall in 2008.  The photo was retrieved from the Wayback Machine: 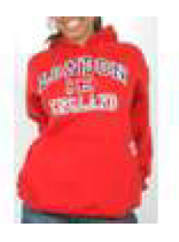 KK Hosiery's 2007 and 2008 catalogue contained the following photos of headgear bearing the words "London" and "England" above and below the UK flag: 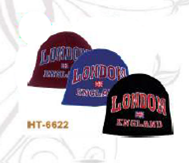 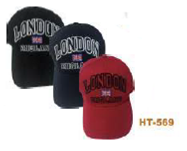 Interpreting the Designs
Mr Campbell found both the hoody and T-shirt designs were unexceptional and that the only element that could convey novelty and/or individual character on the designs as a whole was the London, flag, England arrangement.   As the registrations were in colour he also concluded that the colours formed part of the registered designs.
Invalidity
Mr Campbell found that Urban Attitude garments anticipated both registered designs.  Lambert Souvenirs also anticipated the hoody design.   As neither design was new the registrations were invalid.
Infringement
Had the designs been valid the recorder saw some force in the defendant's argument in response to the allegation of infringement.   As they were not, he did not need to consider the point.
Amplification or Clarification
Anyone wishing to discuss this post or anything arising from it is welcome to call me on +44 (0)20 7404 5252 during office hours and send me a message through my contact page
Erol hoody individual character infringement novelty Posh Fashion prior art registered designs t-shirts validity