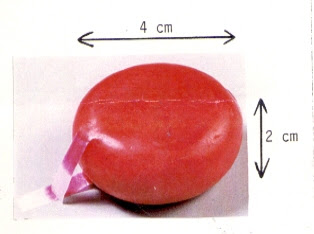 This was an appeal against Mr Allan James's decision of 13 Feb 2019 that the registration of the above 3-dimensional sign under trade mark number UK2060882 was invalid. The hearing officer held that 'the colour red' in the description of the mark was insufficiently clear or precise and that a particular hue of red should have been specified.

The proprietor's grounds of appeal were as follows:

The proprietor applied to adduce new evidence on all three grounds. The respondent, J Sainsbury Plc, cross-appealed for the registration to be declared invalid on the additional ground that the colour fuchsia is not red and that the presence of fuchsia in parts of the picture creates a mismatch between the picture and the description, which renders the mark lacking in legal certainty.

The appeal and cross-appeal came on before His Honour Judge Hacon sitting as a judge of the High Court. His Honour heard the parties on 28 Oct 2019 and delivered judgment on 12 Dec 2019. In Fromageries Bel SA v J Sainsbury Plc [2019] EWHC 3454 (Ch) (12 Dec 2019). In his judgment, he dismissed the appeal for the reasons set out below.

As to the first ground of appeal, the proprietor argued that it is necessary to specify a hue only for a colour only mark. That is because colour is the only characteristic of such marks. It is not necessary to specify a hue when colour is just one of several characteristics. In response, the respondent relied on the Appointed Person's decision in Calor Gas (Northern Ireland) Ltd's Trade Mark Application SRIS O-340-06 (unrep.) where the applicant had tried to register a Calor Gas cylinder as a trade mark.  Mr Geoffrey Hobbs rejected the application on the ground that

"The Sieckmann criteria are clearly not satisfied by a graphic representation which lacks precision as to the particular colour or colours in which the identity of a colour specific sign resides."

Judge Hacon summarized the parties' arguments at paragraph [38] of his judgment. Neither party challenged the finding by the hearing officer that the colour red is an essential characteristic of the Trade Mark. They differed on whether that finding was correctly applied. The proprietor's position was that because colour was one of several essential characteristics, there was no requirement that its hue had to be specified in the description. The respondent supported the hearing officer's approach: once he had found that the colour red was an essential characteristic, it necessarily followed that precision as to hue was required.

The judge found that there were some marks such as Coca Cola and Tesco where colour is part of the description but it had not been necessary to specify a precise hue.  In those cases, the precise hue is unlikely to play a significant role in making the mark capable of distinguishing the goods or services of their proprietors from those of other undertakings. The hues could vary without affecting the mark's capacity to distinguish.  But that is not always the case.  He said at paragraph [67]:

"It seems to me that where a mark contains colour but is not a colour per se mark, the need for precision as to hue will depend on the extent to which other elements of the mark serve to make the mark capable of distinguishing. More exactly, it will depend on the extent to which the colour of the relevant feature of the mark contributes to making the mark capable of distinguishing and whether it is likely that only a particular hue will confer on the mark that capacity to distinguish. It will always be a question of fact and degree."

The respondent had filed evidence that

"the purchasing public never see just the waxed cheese (in the form shown in the trade mark registration), in a retail situation. Where the cheeses are sold, they are always covered by at least two, and often three, layers of branding:
a) the waxed cheese is covered by a branded wrapper;
b) the wrapped cheese is then packed in a net bag with a branded swing tag; and
c) the net bags of cheese generally appear on shop shelves within a branded box."

The retail branding took the form of labelling which prominently featured the trade name 'Babybel' in a particular script. It seemed to the judge to very likely that in the market place customers rely on labelling to identify the proprietor's products.  He noted that there was no market evidence of the extent to which a precise hue of red would be required to confer distinctiveness on the trade mark because that mark is never used without other indicia.

Judge Hacon rejected the contention that in respect of a trade mark featuring colour, the question whether the particular hue of the colour must be specified depends on whether the colour is an essential characteristic of the mark. The question was whether the trade mark was capable of distinguishing the proprietor's cheese from the cheese of all other undertakings on the assumption that the hue used in the trade mark may be any hue of red. The judge reached the view that on the balance of probabilities the ttrade mark could be capable of distinguishing only if a particular hue of red used on the main body of the product is associated with the proprietor's cheese. It followed that the trade mark had to be limited to a single hue of red. As no such hue had been specified, the registration would be invalid.  His Honour, therefore, rejected the first ground of appeal.

"Where the application is accompanied by a verbal description of the sign, that description must serve to clarify the subject matter and scope of the protection sought under trade mark law and such a description cannot be inconsistent with the graphic representation (see, to that effect, judgment of 27 March 2019, Hartwall, C-578/17, EU:C:2019:261, paragraphs 39 and 40)."

Finding a similar uncertainty in this case, the judge rejected the second ground of appeal.

The third ground of appeal was essentially an application under s.13 of the Act to limit the rights conferred by the Trade Mark by way of specifying that the colour red was Pantone 193C. His Honour rejected that application for two reasons. The first was that the UK registration took priority from a French trade mark registration that contained the same pictorial representation and the following description:

As can be seen, the French description did not specify any particular hue or Pantone. The judge's second reason was that s.13 may not be used to correct a defect in a trade mark registration.   Relying on the Court of Appeal's decision in Societe Des Produits Nestle SA v Mars UK Ltd. [2004] EWCA Civ 1008 (26 July 2004), he said:

"[89] There is thus an important distinction between a limitation which narrows the scope of acts which would infringe a trade mark and one which would affect the description of the mark itself.
[90] In my view, the application by [the proprietor] in the present case is analogous to that made by Nestlé and is not permissible for the same reason. A limitation to Pantone 193C would not merely limit the rights conferred by section 9 referred to in s.13 of the 1994 Act. It would go further and introduce an additional feature into the content of the Trade Mark in order to make it distinctive. It would affect the description of the mark itself."

Judge Hacon rejected the cross-appeal on the ground that a reader of the specification would conclude that 'the colour red' encompasses the colour of the pull tag.

The need for consistency between the pictorial representation of a mark and its verbal description potentially affects all marks other than word marks.  In argument, the proprietor had contended that upholding the hearing officer's decision would mean that vast swathes of marks on the UK Registry database would suddenly become vulnerable to a declaration of invalidity.  His Honour responded at paragraph [28] as follows:

"I do not accept that upholding the Decision would have the dramatic effect claimed for reasons I discuss below. I cannot, of course, say that there could be no possible consequence to any other trade mark currently on the UK register."

The reason why the judge took that view seems to be that uncertainty arises only when there is a danger that the description of a mark and its representation by themselves fail adequately to distinguish the proprietor's goods or services from those of all others.  In the case of Tesco and Coca Cola, there was no such danger because of other features of the mark.  There was probably no danger in the case of the proprietor's cheese in the way that it is marketed because the red image is always accompanied by its product name. But absent those additional features, a block of cheese wrapped in red was not distinctive at all.


This is one of the most remarkable cases that I have ever read.   It is important because it greatly increases the range of creations in which copyright can subsist.   I first thought it was a bit of a joke because that is how it was presented in the press (see  Food taste 'not protected by copyright' rules EU court13 Nov 2018 BBC website).  Now I see its potential for all the creative industries.